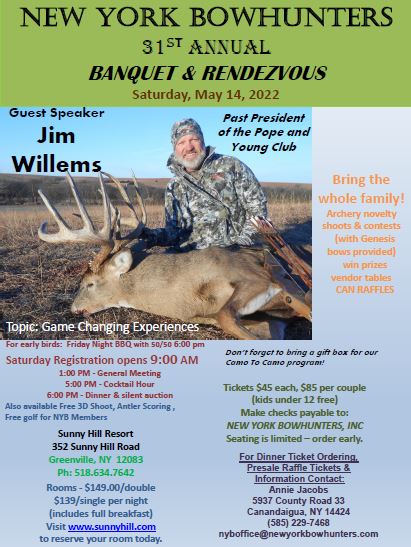 Because NYB is a not-for-profit organization which is run on a volunteer basis, we felt it very important to recognize outstanding individuals who have gone above and beyond in performing their duties on behalf of NYB. Below are a few of the awards that are available to be given out on behalf of NYB. Awards presentations typically occur at the annual NYB banquet in the spring of each year.

County Representative of the Year Award

Regional Representative of the Year Award

Outfitter of the Year Award

The Outfitter or Charter who is nominated for this award has supported NYB over many years of service. They typically have donated their services in support of NYB and its fund raising events. They are dedicated to the sport of archery and promote it in a positive and professional manner.

Manufacturer of the Year Award

The Manufacturer who is nominated for this award has supported NYB over many years of service. They typically have donated goods or services in support of NYB and its fund raising events. They are dedicated to the sport of archery and promote it in a positive and professional manner.

The person nominated for this award should be very dedicated towards helping, working with and doing programs and projects for the physically challenged above and beyond what is considered normal for their duties. They should be an NYB member but not a member of the NYB Physically Challenged Committee.

The nominee should help foster and perpetuate bow hunting and/or the archery shooting sports and be a good representative of such within the ranks of NYB. Past recipients should be involved with the physically challenged bow hunting committee on each selection of a future recipient.

These guidelines were established to be stringent in the hopes of keeping this a highly cherished and not easily achieved award.

The individual who is nominated for the POTLATCH award is someone who has made a major contribution of materials or a donation of cash to NYB or an NYB program. Many Native American cultures practiced a unique form of giving. The custom was practiced by the leading hunters of native communities. It is a custom of generosity in the extreme. It was intended as an expression of humility, yet it brought the esteem of the entire community, not only because the entire community benefited from the practice, but because ordinary people are in awe of such unparalleled generosity.

Imagine a noble Iroquois hunter. After days of grueling pursuit, he is miles from his home when he harvests a huge trophy animal. The hunter dresses the animal and eats a small piece for nourishment on the long carry home. After a difficult journey he returns home with the trophy. He enters the village palisades with the buck over his shoulders. His people look on in admiration as he stoically carries the animal to the center of the village where he shrugs, dropping the enormous buck to the ground.

In a moment he pulls his knife from its sheath and cuts the last inch from the animals tail. This he keeps as his portion, the rest he leaves for the people of the village. Such selfless giving is Potlatch. It was rarely seen in ancient times, it is even more rarely seen today. Potlatch was the habit of the greatest men of the hunter class. When we see Potlatch today we still have as much admiration as those who observed it in times past.

The OSAGE award is given to a NYB member with many years of dedication to NYB and to bowhunting. The Osage committee is comprised of past recipients; the committee receives nominations from any member. All nominations are reviewed and discussed before the committee votes by secret ballot. The vote must be unanimous on the first round of voting or no award is given for that year. The OSAGE committee meets on an infrequent basis and notifies the President if an OSAGE award will be presented at the annual banquet or not.

The ADEO award is a “friends of award”. ADEO means “our friend” in Seneca. Using the ADEO award we can recognize our friends who hold office, or serve in an “official” capacity.

New York Bowhunters, Inc.s annual banquet is held in the spring of each year. This is our Major fund raising event for the year and is quite the affair to attend. Attendees can win great hunting items in our can raffles or learn great bowhunting tips at our seminars. There is a vendor area where outdoor related items may be purchased or members can talk with outfitters about booking their next hunt. They can rub elbows with bowhunting experts like M.R. James and Barry and Gene Wensel while enjoying a catered meal. The highlight of the evening is our auction where attendees can bid on items such as bows, arrows and great hunts. Items can be purchased at auction at a considerable discount. Proceeds from this event fund the worthy programs that NYB runs throughout the year and allows us to keep our membership fees at a lower level. Please join us at our next banquet this spring; you’ll be glad you did. 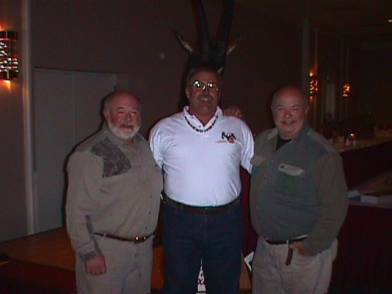 New York Bowhunters (NYB) follows the 9 region breakdown of the state as determined by the Dept. of Environmental Conservation (DEC). Each of these regions is served by NYB regional and county reps. Although held annually on a statewide basis for many years, NYB now promotes having Rendezvous on a regional basis which are typically held at a host archery club or sportsmens club and are tied into a scheduled event such as a 3D shoot. Fine food and family fun can be found at the Rendezvous with many events directed specifically towards our youth. So please make time to join us at your next NYB regional Rendezvous.

You’re welcome to attend any of the Rendezvous but if your Region does not have one, consider getting together with members from your area and starting your own. Contact your Representative to discuss.